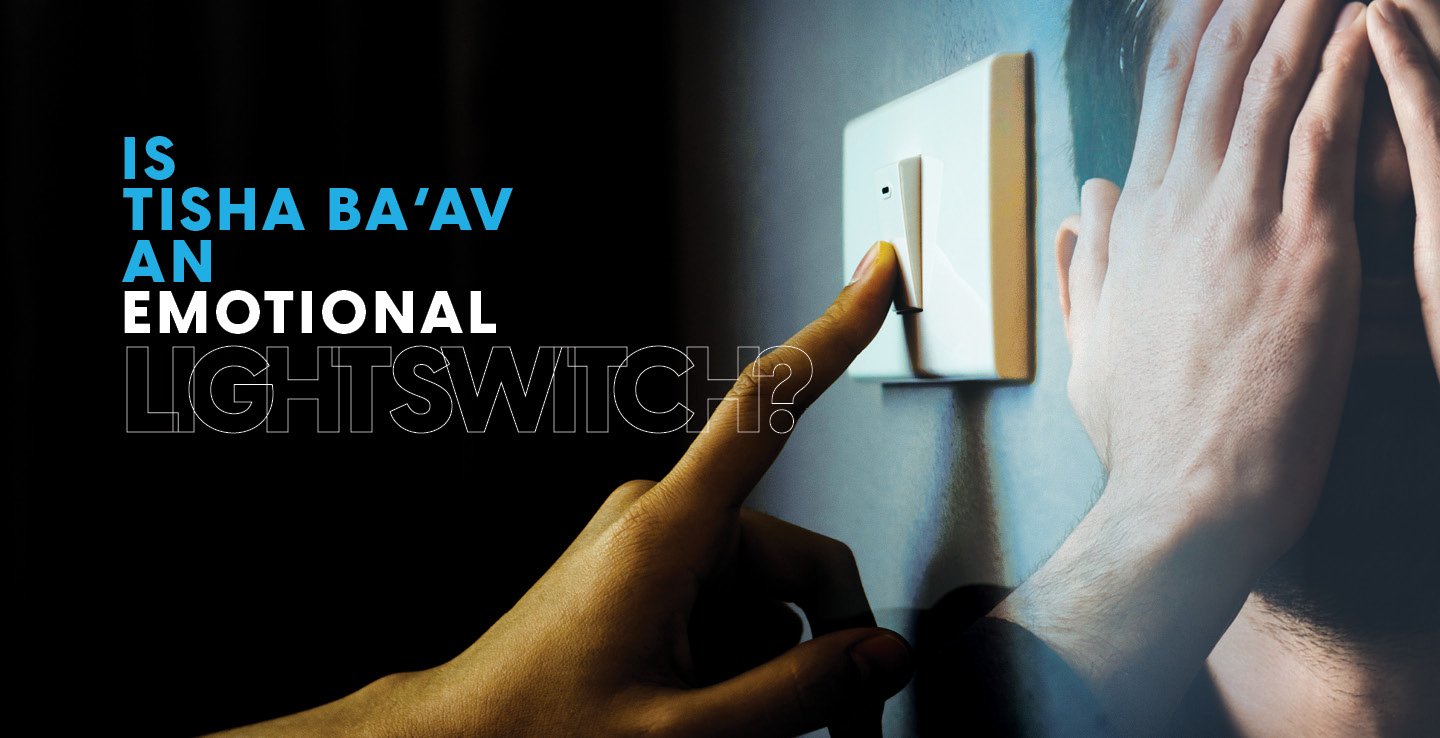 I am fascinated and challenged by  the emotional nature of the Jewish calendar. For example, the juxtaposition of Yom Kippur and Sukkos, particularly Simchas Torah, baffles me. One day we’re in shul, serious and solemn, and just a few days later, shul feels like a party. Is this a light switch? Don’t we need a few days post Yom Kippur to ease out of such an intense, introspective mindset? How are we meant to feel one way and then feel the seemingly opposite just a few days later?

Tisha Ba’av is perhaps the most emotional day of all on the Jewish calendar. There is build up – we have three weeks to prepare. There is some time for let down too – we only end our mourning at chatzos the following day. On Tisha Ba’av, we have a historical precedent for intense emotion. When the spies returned with fearful reports of Eretz Yisrael, the Jews wept hopelessly, and their emunah – which was built so strongly when Hashem took them out of Mitzrayim – took a disastrous hit, with generational ramifications. This day was established as a time to weep for all generations.

One can conclude from this incident that lacking in emunah, speaking lashon hara, and belittling Eretz Yisrael are all very serious things. In fact, Hashem decreed that the Jews would not enter Eretz Yisrael for another 40 years as a result, and the 9th of Av became a day predestined for tragedy.

Yet here’s the catch: When the 9th of Av rolls around in 2022, and even in the decades that have preceded it, we struggle to feel the tragedy. The story of the spies was an inconceivably long time ago. The destruction of the batei mikdash was a really long time ago. And the “modern day” tragedies that occured on the 9th of Av – the signing of the decree of the Spanish expulsion and the start of World War I – were also so long ago, and it can feel  like we’re grasping in the air to connect.

Maybe we’re looking at time the wrong way. The auspiciousness of an event should in fact have nothing to do with how long ago it occurred. The event is auspicious because of its long-lasting significance. While it may feel like an eternity ago, we can reach back in our minds and our hearts and connect to the significance of the day.

Think about the wedding of your great great grandparents. If you saw those black and white pictures of faces you don’t recognize and a world so much unlike your own, it’s almost impossible to feel joy or even appreciation for the wedding of these relatives you never even knew. But if you stop to consider the significance of this event – I am alive in this world because these two people got married – then their wedding has newfound meaning. It actually has critical significance and relevance to your very life.

This is how we need to look at Tisha Ba’av. In Kinnos, we read, “On this night, the calendrical cycle turned to an auspicious date.” Tisha Ba’av is called a moed, a holiday, in Eicha (1:15). The literal translation of moed is “meeting.” Jewish time is cyclical, and on the 9th of Av we are literally meeting an existing spiritual reality in the cycle of time. In this particular spot of the cylinder, it’s bleak, painful and tragic. And we try to plug in. We try to feel it. But instead of trying to relive the pain of so many generations ago, perhaps we can try to plug into the source of the pain which is being generated on the 9th of Av. Because we all have pain. We have yesterday’s pain, and we have today’s pain. And that’s something we can feel. It is relevant and relatable, all the things we want Tisha Ba’av to be. It is a pain is sourced in that ancient day when the Jewish people lost their faith in Hashem and in Eretz Yisrael, and it continues today.

If we can step back and understand that our pain is wrapped up in the pain of the Jewish people, that we are part of a bigger destiny, then we can come closer to understanding that whatever suffering we’re going through, we’re part of something larger than ourselves. And while we may not understand the reason, meaning or significance of our personal suffering, we can feel it. We can plug into the cylinder on the 9th of Av and not feel as alone in our pain, knowing that there are generations before us who felt it too.

This is the work of Tisha Ba’av. If you take a moment to feel your pain this year, and acknowledge its source and its root in our history and destiny as a Jewish people, you’ve felt Tisha Ba’av.

Mrs. Alex Fleksher is an educator, speaker, op-ed columnist for Mishpacha Magazine, co-host of Deep Meaningful Conversations, and creative director of the Faces of Orthodoxy social media account. She holds a Masters degree in secondary Jewish education from Azrieli Graduate School and an undergraduate degree in English/Communications from Stern College for Women. Alex is an active member of her local Cleveland community and a dynamic teacher with a passion for community activism. She’s a former chair of the Shabbos Project Cleveland, a founding board member of Chaviva High School for Girls and a co-founder of The Chizuk Retreat Cleveland.