Stand On Your Toes 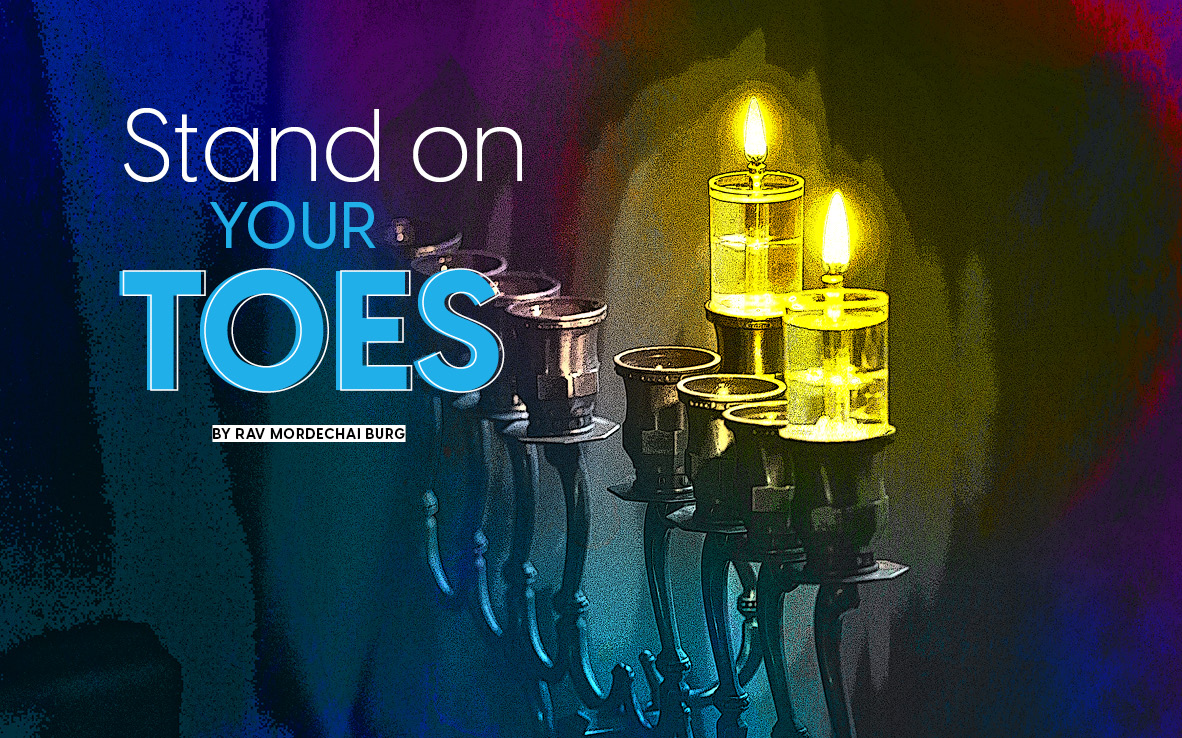 Hundreds of people from all over Poland and Russia would gather to see the great Rav Dovid’l of Tolna light the Menorah. It was a dangerous and exhausting journey, but Chanukah was a special time for the Tolna Chasidim, with a serious dedication to Avodas Hashem and beautiful singing and dancing. To see the Maggid of Tolna light the giant silver Menorah of his saintly grandfather was a sight to behold. Bleachers were set up in the small Shul so the massive throngs of people could see the Maggid’s Avodah. Those who came were inspired for the duration of the long, cold, and dark winter ahead. It was well worth the trek.

One year Rav Dovid’l was standing by the Menorah with the shamash in his hand, but he did not light the Menorah. Five minutes went by, and then ten. The Tolna Maggid stood silently while the masses waited for the Maggid to begin making the brachos. Finally, after twenty minutes, the Maggid turned around and asked, “Where is Shaya the Hoiche (the tall one)?” In that town, there were many Shayas. This particular Shaya was known for his exceptional height. Shaya was a simple Jew who never had a Jewish education because his parents were killed when he was younger. He did not know Masechtas of Gemara or even Pesukim in Chumash. But, he was a Yaarei Shomayim of the highest caliber. Shaya could not believe that the Maggid was calling for him, especially during this auspicious occasion. Still, the Maggid insisted that Shaya come forward. Seeing Shaya’s reluctance, the Maggid implored him, “My life depends on you.” Seeing as he had no choice, and with significant pressure from the Chasidim who surrounded him, Shaya went down from the bleachers and approached the Maggid.

When Shaya finally approached, Rav Dovid’l said, “Shaya, I must ask you a question, and my whole life depends on your answer.”

Shaya responded, “Rebbe, I don’t even know how to read the aleph-beis. How could I possibly know something that the Rebbe does not know?”

The Maggid assured Shaya that this was a question he could answer. The Maggid asked, “Shaya- do you love your wife?”

Shaya was flabbergasted. What was the Maggid asking him? It did not seem like a fair question, especially in front of all of the Chasidim who were there. Why did the Maggid want to know if he loved his wife? Still, Shaya was asked, and he felt compelled to answer. “Yes, Rebbe, I love my wife.”

Rav Dovid’l was delighted by this. He clapped his hands and announced to those present, “Shaya loves his wife.” The Chasidim were confused, to say the least. This was quite unlike any other year. The Hadlaka of the Neiros Chanukah was a time of serious Avodas Hashem. They were accustomed to the Maggid swaying back and forth and reciting the brachos passionately. This was certainly not the time to check in on Shaya’s Shalom Bayis.

The Tolna Maggid was not satisfied. He asked, “Shaya, you must be leaving something out. Are you sure you’re not leaving anything out? Shaya, please think.”

After a moment, Shaya responded, “Yes, Rebbe, you are right, my wife is very short, and though I am bending down, I am still very tall. My wife stands on her toes to listen when I tell her that I love her.”

The Maggid was ecstatic! He gave Shaya a kiss and lit the Menorah like never before. The Chasidim had never seen the Maggid make the brachos and light the Menorah with such passion. The singing and dancing that followed mirrored the enthusiasm of Rav Dovid’l. Deep, deep into the night, the singing and dancing continued. Finally, some of the elder Chasidim gathered the courage to ask why the Maggid had that strange exchange with Shaya. The Maggid explained: “I was about to light the Menorah when suddenly I thought, does Hashem really care about my small candle? And if He doesn’t care about my one small candle, does he really care if I put on Tefillin? Does he really care if I wear Tzitzis? Why would an infinite God care about Dovid’l from Tolna? Hundreds of people were waiting for me to light the Menorah, and I was mamash lost! And then I turned around and saw Shaya the Hoiche. Shaya is so tall, and his wife is so short. Just as Hashem is so far beyond us, we are so far below Him. And tonight, Shaya taught us that the Master of the Universe bends down to whisper in our ear that He loves us; all we need to do is stand on our toes to hear Him.”

We live in exceptionally dark times. Hashem’s loving whisper is so challenging to hear. Rav Yitzchak Hutner points out that there are two aspects to Birchas HaTorah. Asher Bachar Banu Mikol Haamim, we were chosen from amongst all other nations and Vinasan Lanu Es Toraso, that Hashem gave us His Torah. Rav Hutner explains that it used to be that every Jew knew in his heart that the Jews were the chosen nation, but to follow halacha was difficult given the circumstances of the times. Today, the Vinasan Lanu Es Toraso is easy. Kosher food is readily available, and we don’t need to be Mechalel Shabbos to stay alive. Shuls and Yeshivas are on every street corner! Ahhh, but the Asher Bachar Banu is so difficult. To remember that Hashem chose us from amongst all the nations of the world, to feel a sense of Jewish pride, that we have lost.

Chanukah is a time when Hashem bends down, so to speak. It is Halachically preferable for a person to light the Menorah lower than ten Tefachim because Hashem bends down to us on Chanukah. All we need to do during these auspicious times is to stand on our toes. We must close our eyes and listen to Hashem as he calls out to us in the darkness and pain we so boldly face. This Chanukah, may we merit not only to carry Hashem’s yoke, but to once again feel His loving embrace.