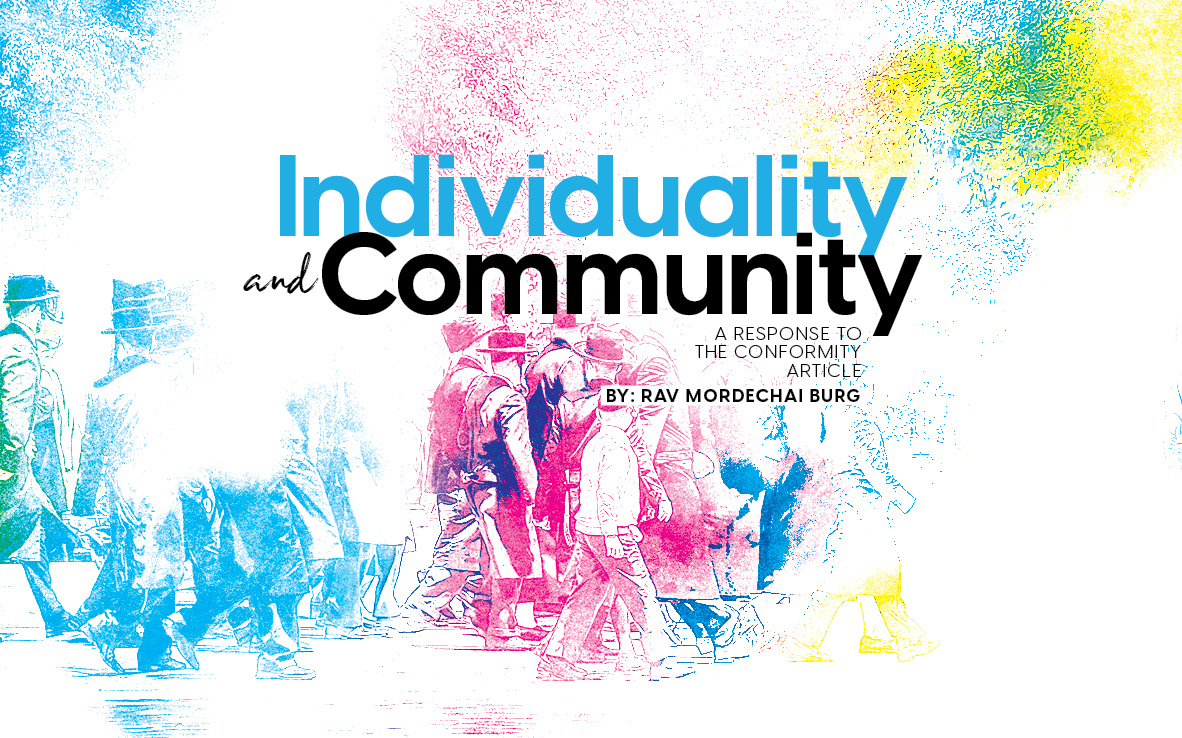 A response to the Conformity article

Rav Moshe Schonbrun recently wrote an excellent article for Meaningful Minute on the value of individuality in Judaism. Citing an excerpt from a recent Mishpacha Magazine article in which Rabbi Meir Kahane, Menahel of Chedvas Bais Yaakov in Yerushalayim, extolled the virtues of being a conformist, Rav Schonbrun took umbrage with Rabbi Kahane calling conforming a middah tova. In Rav Schonbrun’s words “This is wrong and harmful.” Rav Schonbrun went on to correctly point out the dangers of teaching our children conformity over individuality. Children who lose their capacity for self-expression cannot be passionate about their Yiddishkeit. In his words, “Required social conventions and behaviors prevent genuine relationships from flourishing – with loved ones, with friends, and with Hashem.” The article touched on some very important points and concluded with a call for our community to develop the individuality of our children. It is highly recommended reading.

And yet, I think there is a nuance that can still be contributed to the conversation. I have a niece that learned under Rabbi Kahane in Chedvas, and when she visited us for Shabbos she too quoted from a shiur that Rabbi Kahane delivered on the value of conformity. It sparked a lively debate at our Shabbos table, with my niece repeatedly saying, “That’s not what Rabbi Kahane meant!” Not having attended the shiur I could not say for certain what Rabbi Kahane meant but somewhere in my head, I made a mental note to do further research. A mental note, that like many others in my mind, sat collecting dust until I read Rav Schonbrun’s article and subsequently Rabbi Kahane’s article in Mishpacha Magazine.

The question posed to Rabbi Kahane in this article was regarding parents falsely signing school documents. Ostensibly this is referring to a situation where the school mandates a certain standard in the home and parents are not abiding by the school rules. Rather than adopting the standard of the school, the parent signs the form falsely. Aside from the negative impact this has on the school and the families who have chosen to participate in this system, and aside from any halachic or ethical implications, Rabbi Kahane put forward three reasons why this has a detrimental impact on the chinuch of those children. It teaches our children that dishonesty is okay if it gets you what you want. It conveys a message of disrespect for the system these children are in. Finally, it teaches our children that they do not need to conform to the standards of the society in which they live. At this point, it is only fair to quote Rabbi Kahane in full.

“Refusal to Conform — Conforming is a middah tovah. Torah does not require society to accept the standards of the individual. The individual must conform to the standards of society (see the mishnah at the beginning of the fourth perek of Pesachim). Teaching children that one can join a system or society and do as he pleases is hashkafically incorrect and does not develop in the child a value for the middah of conforming, but rather the opposite. And that is detrimental to the child.”

I have spent a lot of time thinking about what Rabbi Kahane wrote and while admittedly I have not spoken with him, I believe that he would agree with Rabbi Schonbrun’s article. Rabbi Kahane’s point was not that our children should lose their individuality to conform to society’s expectations of what they should be. From the Torah that I have heard in his name, Rabbi Kahane seems to be a person who values personal growth and deep personal self-reflection. His point is about how we, as individuals, participate in a community.

There is a dialectical tension at play here. How do we negotiate the value of individuality and the value of community?

As individuals, we must be loyal to the unique Godly soul that we are endowed with. Acting out the play of life pretending to be a character that you were not designed to be, saying someone else’s lines so to speak, is a failure to fulfill your unique Godly mission. In the words of the Ramchal (Mesilas Yesharim ch. 26) “We can easily understand that every person needs direction and guidance in accordance with his skills and his occupation since the path of piety for one who studies Torah all day is unsuitable for one who is in the employ of another, and neither of these ways is suitable for one who is engaged in his own business. And this is the case regarding all the other particulars of human affairs in the world: There is a path to piety that is suitable to each and every individual whatever his profession.”

On the other hand, Judaism also puts a primacy of value on the notion of community. For example, on Yom Kippur, the Kohen Gadol atones for “himself and his family and for all the congregation of Israel” (Vayikra 16:17). The Navi calls the Jewish People “one nation on earth” (Shmuel II 7:23). The Gemara in Yoma (86a) calls the Jewish People one body. Chazal explain that when the Jewish People are in a crisis and a Jew chooses to separate himself from the community, two angels will place their hands on his head and say, “This man who has separated himself from the community will not see the consolation of the community.” (Taanis 11a) Similarly, the mishna in Avos (2:4) famously quotes Hillel HaZaken, who warns, “Do not separate yourself from the community.” We daven together as a community, and even our personal bakashos in davening are made in the plural to demonstrate that all Jews are connected to one another. Indeed, the Arizal instructs one to accept upon himself the mitzvah of loving every Jew before davening, further emphasizing the communal nature of tefilla.

We see this dialectical tension in Kerias Shema. A number of lines in these two paragraphs appear to be nearly identical, but a careful examination reveals some small but important distinctions. The first paragraph is written in the singular: Teach Torah to your son (לבניך). Put tefillin on your hand (ידך). The second paragraph is written in the plural: Teach Torah to your children (בניכם). Put tefillin on your hands (ידיכם). The first paragraph addresses the individual, while the second addresses the community. We begin the Shema by acknowledging the value of the individual, but true individuality requires community.

Hashem’s oneness has paradoxical philosophical implications. On the one hand, our unity is a function of His unity. We all share a common root soul; each one of us is a spark of the Divine. On the other hand, Hashem’s oneness and infinitude gives birth to the individual. An infinite G-d is expressed in infinite ways. The unity of Hashem is paradoxically found in the diversity of creation.

Neither the individual nor the community can come at the expense of the other. The Gemara in Brachos (58a) instructs us to make a bracha upon seeing 600,000 Jews. At first blush, Chazal seems to be instructing us to make a bracha on the community but the text of the bracha gives us a fundamental insight into the dual nature of this bracha. The bracha recognizes Hashem as one who “knows secrets.” In declaring Hashem to be the Knower of secrets, we are recognizing that He knows the truth of every individual within the community. As the Gemara explains, just as the faces of individuals are different, so too are their minds and their characters. In other words, there is a special bracha that we make when we confront Klal Yisrael as a community and within that very bracha we recognize the value of the individual by referring to Hashem as the knower of secrets. The individual cannot be lost to the community but a community is much more than just a group of individuals. Or as the great Hillel put it, “If I am not for myself, who is for me? And if I am only for myself, what am I?” (Avos 1:14)

If we are truly acting as individuals we will do so within the context of a community. We can at once recognize the unique nature of our souls and the shared essence that we all have in common. It is en vogue to preach about the value of individuality but I fear that what is often being taught is individualism. Being yourself at the expense of others. True individuality demands that we participate in something larger than ourselves.

Rightfully, every community has standards. In an age where the pernicious influence of secular values is easily demonstrated some communities have taken the approach of isolation and others the approach of negotiation. People who participate in these communities rely on the honesty of their neighbors to uphold the values of the community. Parents who are dishonest with their school systems erode the foundation of trust that binds the community. Rabbi Kahane’s point is that we must teach our children what it means to be a part of a community. No man is an island. Though I must admit I am deeply uncomfortable with the word conformity, I would agree with Rabbi Kahane that we ought to teach our children how to participate in and uphold the standards of the community. If the community’s values do not match your own, Baruch Hashem today we are blessed with a multitude of communities each with their own unique way of serving the Ribono Shel Olam. Choose one that matches your values so that you can raise your children to be strong members of the community. Of course, it goes without saying that a community ought to balance the unique needs of the individual but that is a very delicate balance, one that requires strong leadership and a sophisticated membership.

Yirmiyahu HaNavi tells us that in the times of Moshiach, a קהל גדול, a great community, will return to Eretz Yisrael (Yirmiyahu 31:8). Individualism cannot bring Mashiach. A group of true individuals who express their Godly individuality through the mechanism of the community reflects the greatness of Hashem. This is the nature of the great community that will return to Eretz Yisrael heralding the coming of Mashiach, may we merit to see his coming speedily in our days!

4 comments on “Individuality And Community ”